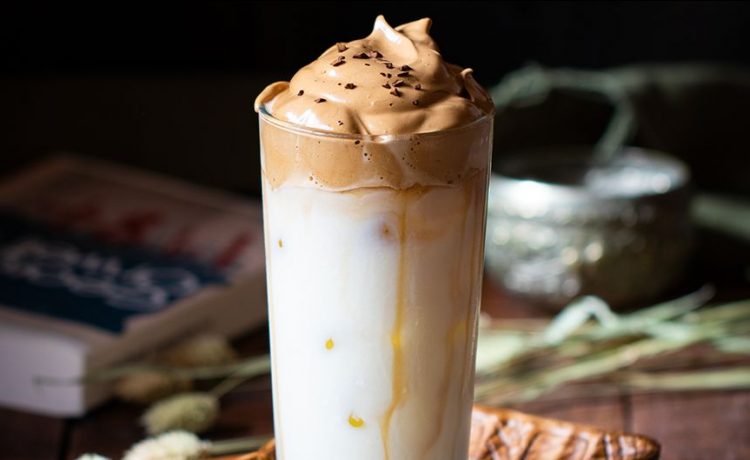 In Jan this year, a new trend started making its way around TikTok and Instagram – a chilled glass of milk topped with a tall golden foam. Dalgona Coffee had been introduced to the world and it defined lockdown glamour. From the young to the old, everyone wanted in on the craze.

Originally referring to a candy, Dalgona means ‘honeycomb toffee’ or ppopgi in Korean and dates back to the 70’s and 80’s when it was a popular street side treat. It is said to have been created after the Korean war during which the US Army personnel gave candies to the local kids. Since the parents were unable to spare the money for such treats, they went about creating their own cheaper alternative with just sugar and water. Traditional Dalgona is made like the honeycomb toffees. The sugar and water is mixed and brought to a boil till it turns into a light golden caramel color and baking soda is then added to the mixture. The liquid sugar puffs up and hardens, resulting in a light and crunchy treat. Unlike caramel, Dalgona is not just sweet. It tastes sweet at first and then has a slight hint of bitter and is also served as a perfect accompaniment for milk teas and coffees. Reminiscent of a time gone by, it is now trending in cafes in Seoul as a beverage. A traditional Dalgona brew is a tall glass of iced milk into which strong black tea or coffee is poured artfully around the edges and topped with crushed Dalgona pieces. It is then consumed after about five minutes giving the crushed pieces time to melt and blend into the milk. Since the lockdowns curtailed travel, the craze took over the world once the video created by Korean actor Jung II-woo aired, where he showed how to make the home version using instant coffee powder, sugar, hot water and iced milk.

Around march this year, Google registered an increased search for banana bread recipes. Stuck at home on account of the lockdown and a limitation of availability of ingredients combined with an urge to continue eating yummy foods, people found solace in banana breads. Firstly, it wasn’t a cake and it had fruit. Almost as good as eating a salad, some said. This wasn’t the first time that banana bread had become popular. During the Great Depression, a housewife had created the bread to use up some bananas that were going bad. Economical because it used ingredients usually found in any kitchen irrespective of the seasons, banana bread has been the staple baked good during times of financial and social distress

In fact, the comfort this warm, sweet and carb heavy baked treat brings is also backed by scientific data as a quintessential mood booster during the pandemic.

Yet another fad that has taken over the world during this pandemic has been that of baking bread at home. Flour, water, salt and yeast. Simple ingredients that form the foundation of bread, a staple that is considered life giving. Finding a sense of therapeutic rhythm and predictability in the blooming action of the yeast and the fragrances wafting through the kitchen when a loaf of bread is baking in the oven, it’s no surprise that this food trended the way it did. While neighborhood stores ran out of yeast, people once again fell back on the ancient tradition of cultivating wild yeast present in the air around us. Thus began the Sourdough Revolution. A different kind of baby boom took place – the sourdough starter boom. Akin to a needy baby or puppy, these need regular feeding and measuring so they can mature and help make beautiful and healthy artisanal bread. Now that Halloween is here, Pumpkin shaped breads are being churned out by professional and home bakers.

When humanity collectively face trials, traditions take a beating. During times of peril, food has been a comfort to man. Like the speakeasies of the Prohibition, Depression cakes of the World War Era or the Dalgona Coffee and Banana Bread of the current pandemic, we have always managed to find a way around the limitations to ensure our love affair with food continues unabated.

On the subject of me

How to Be a Step Ahead of Those Cravings